"President Trump’s Rose Garden declaration of an end to the partial shutdown was a tactical retreat, a rejection of a Little Big Horn strategy. He found himself in a no-win situation, and rather than bear unacceptable costs, has redefined the contest on better terms. Democrats naturally are gloating, calling it a surrender and admonishing Trump to “learn his lesson”

Nonetheless, as President Trump correctly noted in the Rose Garden address, it was an “agreement.” The Dems agreed to procedural rules that can be used to make the case for border barrier construction. The deal will be hashed out in the conference committee, which will then submit the same legislation to both Houses of Congress, with the 21-day clock ticking. Either chamber can modify the legislation, but that happens under the gun of the ticking clock.

The shutdown had to end because a choke point had been discovered: commercial aviation. It was obvious when the Air Traffic Controllers demonstrated their ability to stymie air travel at the nation’s busiest airports that President Trump, having declared ownership of the shutdown, would be blamed for strangling the economy, and was on the hook for any air traffic control disaster that might, God forbid, happen

Read it all by Thomas Lifson 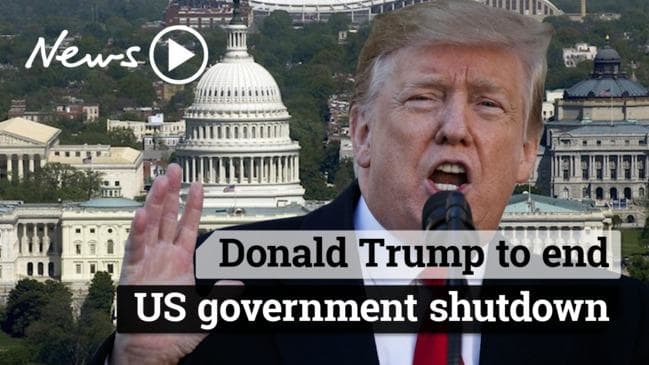 Trump said the 21-day continuing resolution would allow time for a bipartisan conference committee of House and Senate lawmakers and leaders to "immediately begin reviewing the requests of our Homeland Security experts" and come up with a plan to "show all Americans, and people all around the world, that both political parties are united when it comes to protecting our country and protecting our people."

"Many disagree, but I really feel that, working with Democrats and Republicans, we can make a truly great and secure deal happen for everyone," he told reporters at the White House.

"In 21 days President @realDonaldTrump is moving forward building the wall with or without the Democrats," tweeted press secretary Sarah Huckabee Sanders. "The only outstanding question is whether the Democrats want something or nothing."

Another caravan coming from Central America

We have turned away, at great expense, two major Caravans, but a big one has now formed and is coming. At least 8000 people! If we had a powerful Wall, they wouldn’t even try to make the long and dangerous journey. Build the Wall and Crime will Fall!

With a new migrant caravan on the way, Tijuana Mayor Juan Manuel Gastélum issued a statement this week refusing to apologize for the initial shelter conditions when migrants arrived in November, saying his primary obligation is to the residents and city of Tijuana.

“No, I’m not going to apologize,” said Gastélum. "Better, I’d say that the federal government, the Latin American governments and all those people who are against the people of Tijuana, apologize to us.”

Across Tijuana, resources remain strained, volunteers are weary and conditions are crowded. Beleaguered aid workers are barely able to look up from one dire situation to the next.

The temporary shelter set up at Unidad Benito Juarez in Tijuana is packed full in the gym to include the baseball field where tents and makeshift tents have been set up for people from the Central American migrant caravan. (Nelvin C. Cepeda / San Diego Union-Tribune)