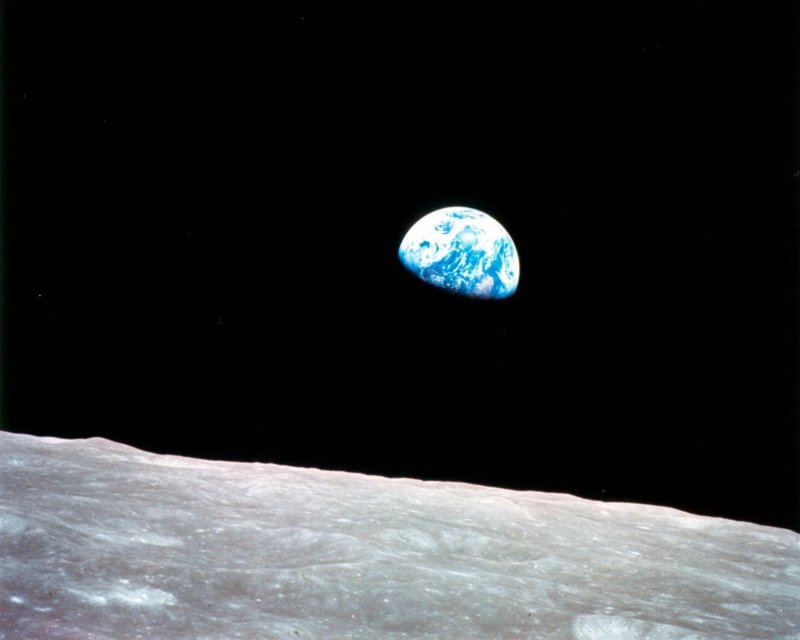 .
The three Americans siting atop the Saturn V rocket (the first time a Saturn V would be carrying humans) on Saturday morning Dec. 21, 1968 were focused on becoming the first humans to reach the moon's orbit.
.
On Christmas Eve December 24 .. they did just that:
.
William Anders

We are now approaching lunar sunrise, and for all the people back on Earth, the crew of Apollo 8 has a message that we would like to send to you.

And God said, Let the waters under the heaven be gathered together unto one place, and let the dry land appear: and it was so.
And God called the dry land Earth; and the gathering together of the waters called he Seas: and God saw that it was good.

And from the crew of Apollo 8, we close with good night, good luck, a Merry Christmas – and God bless all of you, all of you on the good Earth

The Apollo 8 mission, which paved the way for Apollo 11's historic lunar landing seven months later, was fraught with risk. The urgency created by the Soviet Union's efforts to reach the moon forced NASA to compress the time frame and take a number of calculated gambles. The mission took 16 weeks from conception to launch, compared to similar ones that took at least a year to execute.

“Now they’re going to put three men (on only the third Saturn V flight ever and one of its two previous test flights had failed)  aboard this thing," said Robert Kurson, author of 'Rocket Men: The Daring Odyssey of Apollo 8 and the Astronauts Who Made Man's First Journey to the Moon.'