"Psychologist and Google critic Robert Epstein says his research shows that manipulation of search algorithms to favor a given candidate could easily shift people’s voting intentions, with few noticing the bias. He suspects such manipulation in searches for Hillary Clinton during the 2016 campaign."

New York (CNN) - "We allege that Facebook itself is the biggest violator of data misuse in the history of the software industry," Ted Kramer, the owner of Six4Three, the company suing Facebook, told CNN.

The British Parliament has obtained a set of internal Facebook documents the company has fought for months to stop from being made public, according to Facebook and a lawyer involved in a suit against the company.

The cache of documents, some of which may include correspondence between Facebook CEO Mark Zuckerberg and company executives, stem from a lawsuit in California that outlines a litany of allegations against Facebook. Among them: claims about the company's alleged disregard for user privacy, and the claim that Zuckerberg devised a plan that forced Facebook's rivals, or potential rivals, out of business.
.

Google Reveals Plans to Monitor Our Moods, Our Movements, and Our Children's Behavior at Home

(Excerpt)
Patents recently issued to Google provide a window into their development activities. While it’s no guarantee of a future product, it is a sure indication of what’s of interest to them. What we’ve given up in privacy to Google, Facebook, and others thus far is minuscule compared to what is coming if these companies get their way.
Until there's some legislation passed to protect our privacy, there's no stopping companies such as Google and Facebook from learning everything about what we do and who we are and selling the information to advertisers, insurance companies, and eventually, any entity that will pay.  After all, that's their business model.
Read it @ BIG TECH HAS BIG PLANS - BY PHIL BAKER

Want to SEARCH without using Google?

Are you wearing a MAGA hat while reading this?

If so, click on Gibiru .. the search engine you’ve been looking for.

According to their website, “Gibiru is the preferred Search Engine for Patriots.”

They claim their Search results are sourced from a modified Google algorithm, so users are able to query the information they seek without worrying about Google’s tracking activities.

Because Gibiru doesn’t install tracking cookies on your computer they purport to be faster than “NSA Search Engines.”

“These tech giants have a level of control and an ability to manipulate us that Stalin, Mao, Hitler, and Mussolini could only have dreamed of."

On Google, I just typed in “top races Republican,” and the word “races” got a squiggly underline suggesting I had misspelled the word. Beneath it ran Google’s helpful correction: “top racist Republican.” With “top races Democrat,” no such veering into the gutter. No squiggly line. The word “racist” did not insinuate itself into my field of vision. Oh, and before I completed the phrase, with just “top races Democra,” two lines below ran the following little hint: “best Democratic races to donate to.” Huh? Who said anything about donating? I’ve never donated to a political candidate in my life, and if I did, I wouldn’t donate to Democrats. Again, no parallel on the Republican side. No steering me to fundraisers

The documentary The Creepy Line takes its name from a shockingly unguarded remark by the former Google CEO Eric Schmidt. He is smiling and relaxed in a conference as he explains that Google has (had?) a nickname for excessive invasiveness. “Google policy on a lot of these things,” Schmidt says, “is to get right up to the creepy line and not cross it.”

How is that going so far? The Creepy Line, a terrifying and important 80-minute documentary now streaming on Amazon Prime, is an attempt to answer that question. 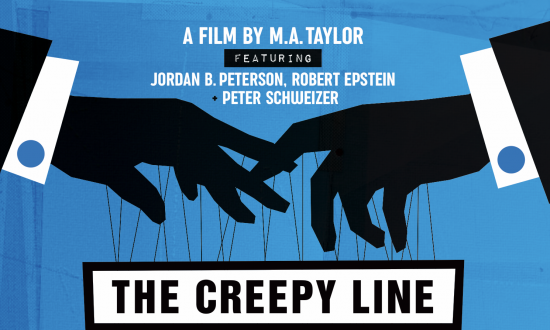 The film delves into some of the troubling habits of our two Internet masters, Facebook and especially Google. An early segment of the film, produced and partly narrated by the journalist Peter Schweizer, illustrates how your search history gives Google an enormous, permanent cache of information about you, everything from what things you like to buy to what you like in bed. Naturally Google uses the data mainly to fine-tune ad sales. But what else might they do with it? Who knows?

Google, noticing that people would leave the search engine to roam the Internet, came up with a browser, Chrome. Now everything you do online through Chrome is logged by Google. But Google wants to know what you’re doing even when you’re not online. Hence: Android. As soon as you log on, Android uploads a complete picture of everywhere your phone has been that day.

“These are all free services but obviously they’re not,” notes professor Jordan Peterson, another talking head in the doc. It’s a surveillance business model. Google Maps, Google Docs, Gmail . . . Google knows more about you than your spouse does.

Read it all @ Google, Facebook, and the ‘Creepy Line’ By KYLE SMITH