President Trump’s economic policies are reversing a decades-long erosion of the middle-class.

This is not a theoretical exercise.  The execution of a broad-based economic and global trade reset is underway. Today’s economic results, the growing strength of our U.S. economy, is a testament to the success of MAGAnomic policy being delivered. These results, when fully realized, will secure our economic future and last for generations.

Factually, substantively and empirically the workers of America are gaining ground. Bigger and better than before and far beyond what anyone else could have delivered. 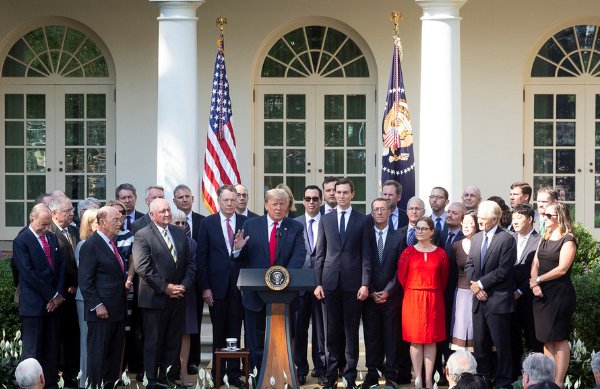 Just sit for a minute and think about the scale of opposition…. it really is an incredible accomplishment, beyond almost anything anyone would have hoped or imagined.

Notice the “we are competing against other countries” part of the statement.  This is key to understanding what is in the future.  The Wall Street ‘multinationals’, corporations making and selling goods, are invested in production within other countries.

On one hand, Wall Street loves cheap money (low fed rates). However, on the other hand Wall Street multinationals are invested in overseas manufacturing; and those corporations don’t want to see the retention efforts of China and the EU undermined with a lower dollar value (lower fed rate).  So Wall Street is schizophrenic (check the stock market).

U.S. tariffs hurt the Wall Street multinationals because they want to keep making cheap goods overseas and they have invested in this process.  To retain the multinationals, the EU and China are devaluing their currency in an attempt to lower the price of goods they produce.

Lowered currency means their stuff costs less when exported to the U.S. market.  They need the U.S. market for their products; AND they don’t want to move their supply chain, or manufacturing into the United States.

As the EU and China devalue their currency, the value of the dollar increases.  President Trump responds to this in a Twitter thread today:

One way for the U.S. to respond is for the federal reserve to cut interest rates, which should lower our dollar value and make it easier to export products; but can also raise the price of things we import.  That is why President Trump notes “(there is no inflation)”.

[However, I doubt any action from the Fed will change anything.  All the data looks to me like the Fed is disconnected in this process.]

We are currently importing deflation as the devalued cost of goods from China and the EU is lower than the tariff rate upon them.   The goal is to move those manufacturing jobs out of China.  Thus the incentive is for President Trump to raise the tariff rate on China even higher.  This looks like the most predictable outcome.

(1) The USMCA ratification.  If/when the USMCA is ratified, this will give multinational manufacturers an established and cemented option to evaluate for supply chain moves.  (Watch Canada election; Trudeau loses and the U.S. stock market will bump.)

(2) The Fed’s rate cut.   If/when the Fed cuts the lending rate again; it will only modestly benefit domestic investment.  The rate cut is against the interest of multinational corporations because it undercuts the defensive efforts of China and the EU; though the cheaper money could help offset relocation costs.  [I strongly doubt much impact.]

(3) Timing.  The Chinese delegation is scheduled to visit in September.  There is almost zero possibility for a deal, unless the Chinese economy is in collapse.

President Trump has a quiver filled with deadly arrows; and after labeling China a currency manipulator, he’s now more likely to raise the tariff rate, perhaps as high as 25% across all sectors.  When this happens U.S. multinational corporations with heavy investment in China will see their supply chain and business model completely changed.