Democrats say they're the party of science, but in reality ...

... They're the party of fear, runaway emotions and myth. 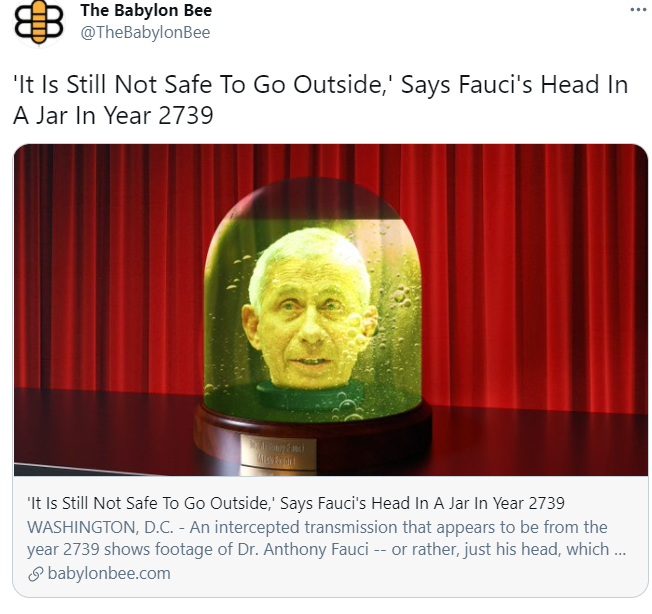 "U.S. health officials have refused to say when U.S. health agencies will no longer recommend Americans to wear masks in public. In February, Dr. Anthony Fauci suggested masks could continue to be around into 2022."

Poll: One of Four Americans Say It Is "Safe" for Them to Go Out in Public Without a Mask 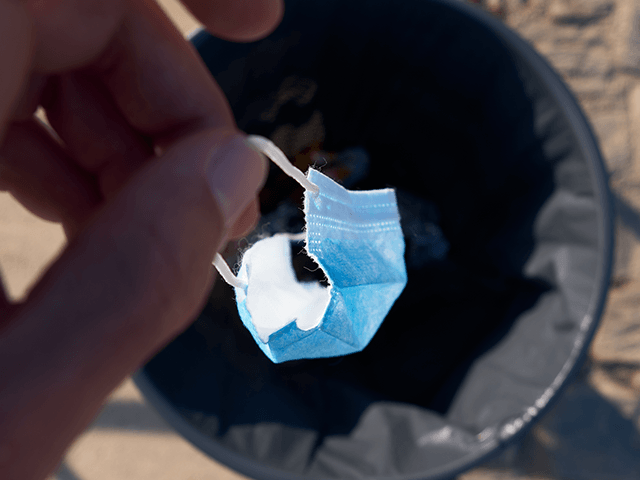 WH COVID Coordinator: In Time, CDC 'Will Allow Vaccinated People More...Privileges to Take Off That Mask'

The Biden administration will not be satisfied until 70 percent of Americans are vaccinated. In the meantime, keep your mask handy until the CDC allows you the "privilege" of not wearing one.

A Plague of Politicians

It is becoming clearer each day that the global imposition of lockdowns in the name of fighting COVID-19 has been one of the greatest political, economic, and social blunders of the decade, and perhaps even the century.  Yet many leaders across the world continue to mandate existing lockdowns and even impose new ones in vain attempts to curb the spread of COVID in their populations.

Originally opposed as an ineffective measure by nearly every epidemiologist worldwide, leaders across the globe followed, in monkey-see, monkey-do fashion, the example of China when it locked down the city of Wuhan and a few nearby areas.

Aping the act of a totalitarian regime, leaders of liberal democracies across the world  implemented lockdowns in what seemed to them, if to no one else, a good idea at the time.  Sold as "two weeks to flatten the curve," lockdowns have continued for over a year, despite great evidence that the only curve flattening that happened was the curve of economic prosperity, and boy, were lockdowns effective at flattening that.

Looking at over a year's worth of data on the course of the pandemic, it is easy to see that the progress of the disease has been essentially the same with or without lockdowns.  The same pattern of rapid growth in cases followed by a growth in death counts, with falloff to very low rates of cases and deaths within two to three months from start was consistent almost everywhere.  There have been no inflection points or other indicators that lockdowns were having a positive effect.  There was no statistical difference between the pattern observed with or without lockdowns, with one exception.  Case rates and death rates were larger in rough proportion to the severity of lockdown.  Clearly, lockdowns made the public health situation worse, with no clear benefit.

On the other side, locking down cities, states, and countries had enormous negative effects.  In the U.S. alone, tens of millions of people were rendered unemployed overnight.  Hundreds of thousands of otherwise healthy businesses were closed, and many of these forced in bankruptcy.  Employment among blacks and Hispanics had reached heights never seen before, and these groups were among the hardest hit by lockdown unemployment.  Suicide and drug overdose levels rose as a direct result of confinement to the point that they exceeded deaths from the disease itself.

Perhaps of greater significance in the long term, was the arbitrary curtailment of fundamental civil rights in the name of "keeping people safe," as if the Bill of Rights was a luxury that could be dismissed if it proved inconvenient.

Lockdowns are predicated on the idea that the general populace is too stupid to take the measures necessary to protect themselves and others from infection, so it is necessary for an enlightened political elite to protect them by imposing draconian measures that violate every concept of civil liberty developed over the last five centuries of Western Civilization.  Leaders would pick and choose which rights their peoples would be permitted to exercise, negating the entire concept that a right is something that does not require permission.

What lockdowns added was an unimaginable level of economic devastation to the mix that resulted in massive destruction of the lives and livelihoods of millions of their citizens.  The attendant damage to civil liberties and to the relationships that are the fabric of society may be irreparable.

To further compound the already massive harm, the U.S. government has now brought about huge increases in public debt by providing "stimulus" payments to citizens whose livelihoods were blocked or destroyed by the politically imposed lockdowns.  The problem with such "stimulus" payments is that by being funded through public debt, they draw vital investment capital out of private hands.  It is well established that a dollar of private investment will create ten to twenty times the employment that a dollar of public funding will.  Further,

since lockdowns have adversely affected production and reduced supply of goods and services, the stimulus funds increase inflation since there are now more dollars available to purchase goods and services in reduced supply -- causing prices to rise.  We are just now starting to see that inflation in the price of energy and housing.  Food and other goods are soon to follow.  They gave us the disease (lockdowns) so they could sell us the cure.

Governments have no money themselves.  All that they spend comes either from current taxes, or from future taxes through a public debt obligation.  By increasing the tax burden, they reduce the capital available for growth investment.  Lockdowns have created a massive need for investment to rebuild productive activities.  Just as lockdowns prolong the course of a disease, so do the tax-funded stimulus payments prolong the time needed to rebuild the economy.  In other words, the government, by providing stimulus payments, has compounded the idiocy of lockdowns with the stupidity of bad economic policy.  While lockdowns should never have been imposed, the best thing that can be done for the present and the future is to immediately remove all lockdowns and associated mandates.

If the CEO of a corporation were to show such destructive incompetence in management of their business, he would be removed by his board and shareholders within days, if not hours.  He might even face criminal charges.  Unfortunately, most political leaders are insulated from the consequences of their acts and can only be removed by slow and difficult processes.  One thing clear from lockdowns is that the power of leaders must be severely limited both in time and in scope.  The people must have the power to act quickly to stop arbitrary acts by leaders and hold them accountable.

It is interesting that of the rights that were curtailed, freedom of religion and freedom of assembly were most violated.  For centuries, churches have been places where people could meet, plan, and support world-changing activities.  The American Revolution, and the Civil Rights movement were only two of many protests against arbitrary power supported by Christian churches.  Gathering to petition the government was also a casualty of lockdowns.  Amazing how lockdowns imposed controls on two of the activities most likely to effectively challenge them.

A great deal of damage has already been done by politically imposed lockdowns.  We should not tolerate a minute more of their insanity. Continuing and even repeating a bad idea doesn't make it any better the second time around.

Yes, we have the advantage of 20-20 hindsight today, so let us put it to good use.  Any future disaster is never sufficient to justify the loss of our fundamental rights nor of our fundamental ability to provide for our own survival.