We Trump supporters have been reviled, rejected, and rebuffed ...

We Trump supporters will never go away

A vast sea of patriots gathered in Washington D.C. last Wednesday to exercise their First Amendment rights to peaceably assemble and petition for redress of grievances. The key word here is “peaceably.”

The overwhelming majority of “Trumpublicans” gathered in good faith to speak freely, and without violence.

The National Mall was packed with more than a million souls by many estimates… a formidable crowd. Many Volusia and Flagler Republicans were part of this movement and told me they saw none of the mayhem we later witnessed at the Capitol.

The Washington establishment and media empires have quickly rushed to blame President Donald Trump and all of his supporters. In truth, we don't yet know whether the primary instigators of the Capitol siege were Trump supporters, or Antifa infiltrators wearing MAGA hats, or both. By contrast, I recall a muted response from the media when Antifa and Black Lives Matter ran amok through Washington and other U.S. cities last year.

We do know that Capitol Police did little to secure the Capitol, and left it vulnerable to a tragic unraveling in the face of a mob.

We do know that President Trump said this to his supporters on Wednesday: “I know that everyone here will soon be marching over to the Capitol building to peacefully and patriotically make your voices heard.” After the storming of the Capitol, he told everyone to “go home in peace.”

I don't agree with those who seek to blame the president, yet again. Donald Trump has been the target of derision, blame and sabotage since the day he came down the escalator in 2015. I do strongly condemn those individuals who committed violent crimes at the Capitol this week; the instigators should own all of the blame for their own criminal actions.

Tech tyrants at Twitter and Facebook have rendered their verdicts by de-platforming the president. CBS-owned publishing house Simon & Schuster has canceled a book deal with Missouri Sen. Josh Hawley, who objected to Biden electors. Ironically the title of his book was to be “The Tyranny of Big Tech.”

Big Media and Big Tech control the narrative, but we can see that millions of Americans are not buying the stories they're trying to sell. It's my considered belief that most of the “mainstream media” speak with one voice, directed by a handful of corporations including Comcast/NBC/Universal, Disney, CBS, Viacom, NewsCorp and AT&T.

Speaker Nancy Pelosi and soon-to be Senate Majority Leader Chuck Schumer are citing flimsy or fraudulent premises for the impeachment of President Trump or his removal through the 25th Amendment just days before the end of his term! This is more Washington shrapnel aimed at discrediting and intimidating the outgoing President and his 75 million or more supporters. It won't work. Congress can't accomplish much of anything in less than 10 days.

Vice President Mike Pence won't consider invoking the 25th Amendment because there is no reason for it.

The vice president dashed our last hope for an honest review of the mammoth fraud in key battleground states on Wednesday, so I acknowledge that the objections from that point forward would prove fruitless.

Nonetheless, I applaud Sen. Rick Scott for lodging his objection to Biden electors. I count myself among many Volusia Republicans who have told me they are deeply disappointed in Rep. Michael Waltz's decision to withdraw his objection to Biden electors after the events that unfolded Wednesday. Senator Marco Rubio also disappointed. We expect our lawmakers to stand in defense of honest elections. Without that, our system will go the way of Venezuela.

I don't see a logical connection between the chaos of a Capitol siege and decisions to withdraw objections to Biden electors. By relenting, we send a signal that an unruly mob can move us away from principled positions.

Democrats have dismissed the president's claims of massive election fraud. I don't believe we had a fair hearing of that evidence in court; nor have state Legislatures been given the opportunity to reevaluate whether their elections were won in accordance with the Constitution and state laws.

Sadly, we are realizing a forewarning from President Abraham Lincoln: “If destruction be our lot, we must ourselves be its author and finisher. As a nation of freemen, we must live through all time, or die by suicide.”

We Trump supporters have been reviled, rejected, and rebuffed. But we will never retreat. I can tell you this. We will not go away, and Donald Trump will be the most powerful once and future president in our history.

Vic Baker is the GOP State Committeeman for Volusia County and the host of the Trump Talk Now radio show. 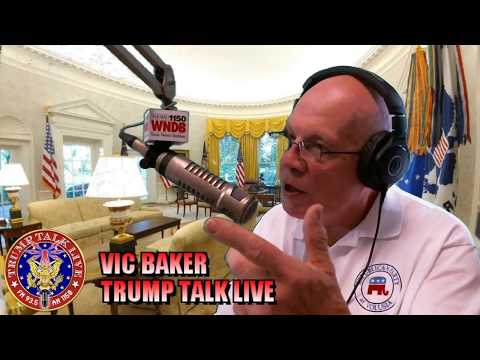