About Tariffs: The big story is President Trump refusing to back down from China.

When an article begins with, “Just about everyone understands…” or “There can be little doubt…” you know that the author has a weak case. Investors Business Daily’s post, dated May 10th begins just like that:

“Just about everyone else understands that the Trump trade war will be bad for US investors, consumers, retailers and manufacturers. The trade war will hit consumer spending and could freeze business investment in the US. It will damage American business prospects in the world's second largest economy. It will hurt global growth and pressure global financial markets. The longer this takes to sink in, the greater the damage to the U.S. economy.”

While Donald Trump’s critics see the trade war through the prism of a hundred dollar price increase for washers and dryers or impact on the cost of footwear, Trump sees the rise of China as a major economic and geopolitical threat.

Trump understands what most economists and Investors Business Daily are missing. In this new world economy, the United States does not have a competitive advantage by virtue of high productivity based on superior organization and advanced technology. Nowadays, if you know what you want and have the money, practically anything can be bought. Project financing is available to anyone anywhere in the world, provided by multilateral lenders and a syndication of investors worldwide. The technologies are available to anyone willing to pay for them, and information is available to anyone with a computer or an iPhone.

In this environment, America is in mortal disadvantage with China. If Chinese enterprises employing modern technologies do not have to comply with the U.S. environmental and safety regulations and pay their workers in a day what their American counterparts make in an hour, this country cannot possibly succeed. American industries are under a military-style assault by China that includes, but is not limited to, manipulating currency, dumping, stealing technologies and know-how, and counterfeiting American products.

China has become a manufacturing plant for American corporations and profits from the manufactured goods sold on the American market have built the economy rival to the U.S. The burgeoning wealth allowed China to build modern military capabilities, construct the islands in the South China Sea, threaten Taiwan, and initiate expansion in Africa and Latin America.

It is not Russia, with a tiny GDP of about 10% of the U.S. and the population of 150 million, that challenges American interests. China, with its massive economy and military strength, has been acting as a geopolitical adversary during the last few decades. Although vastly outmatched by the U.S. in resources, technology and, above all, military capacity, Chinese have often imposed their own preferences by a nonchalance of psychological pressure against the material advantage of the feeble American administrations.

The emergence of Donald Trump inaugurated a new era in America-Chinese relations. Trump is reversing the strategic trend and turning it against China, threatening to regress China’s history for generations. Hence, it is not a trade war -- it’s a cold war. In this cold war, Trump has the upper hand and sees no reason to compromise anything. The United States remains the world-dominant economic power that is enjoying a booming economy.

The imposition of tariffs compounded with a lower corporate tax rate in the U.S. forces American companies to move manufacturing out of China. Most of them are expected to come back to the U.S., although some will relocate to Vietnam or other low labor cost environments. In any event, China is losing, while America is gaining. The longer the negotiations go on, the more companies make a move, and once gone they are not going back. That is exactly Trump’s ultimate objective -- to weaken China by depriving it of revenue.

Trump has trapped China in Zugzwang position -- the situation in a chess game where a player has to make a move, although any possible move will only worsen his position. If China does not accept Trump’s demands, the high tariffs would go into effect. Since China’s economy has a limited domestic consumption, losing American market will have a devastating impact ... If China does accept Trump’s demands, it would have to pay for American technologies that it currently enjoys via forced transfer or outright theft and, also cease utilizing all the other shenanigans that ensure China competitive advantage.

Cato the Elder, the Roman senator, is reputed to finish every speech with a call “Carthago delenda est” -- “Carthage must be destroyed.” Donald Trump could paraphrase it as “China must be destroyed.” Trump sees it not just as a case of national dignity and self-respect, but an imperative for our economic survival.

Alexander G. Markovsky is a senior fellow at the London Center for Policy Research, a conservative think tank that examines national security, energy, risk-analysis and other public policy issues.

More than 300,000 factories in China could shut down if trade war goes full blast

Already stressed, China’s economy is heading for big trouble as U.S. sanctions go into effect on Chinese imports. The tariffs, says China expert Steven Mosher, will be a “serious shock” to China’s economy, and if they remain in place for more than a couple of months, will have lasting impacts on China’s economy.

China now has 60 million apartments sitting empty, due to the government overbuilding, and now with the trade war it won’t just be apartments. “They’re going to have a few hundred thousand factories sitting empty in China where the manufacturers have gone overseas.”

"The overall strategy here is brilliant"

After two years of rope-a-dope…. Trump exits the corner for the championship rounds in the trade fight: First the body blow, China boxed-in with trade confrontation and consequences of retreat from agreement (Mnuchin and Lighthizer);… Then whammo, the roundhouse XO placing telecom under national security review (Navarro and Pillsbury); then upper-cut, Wilburine places Hauwei and affiliates on Commerce Dept. trade blacklist…

Lions and Killers and Strategists, oh my. 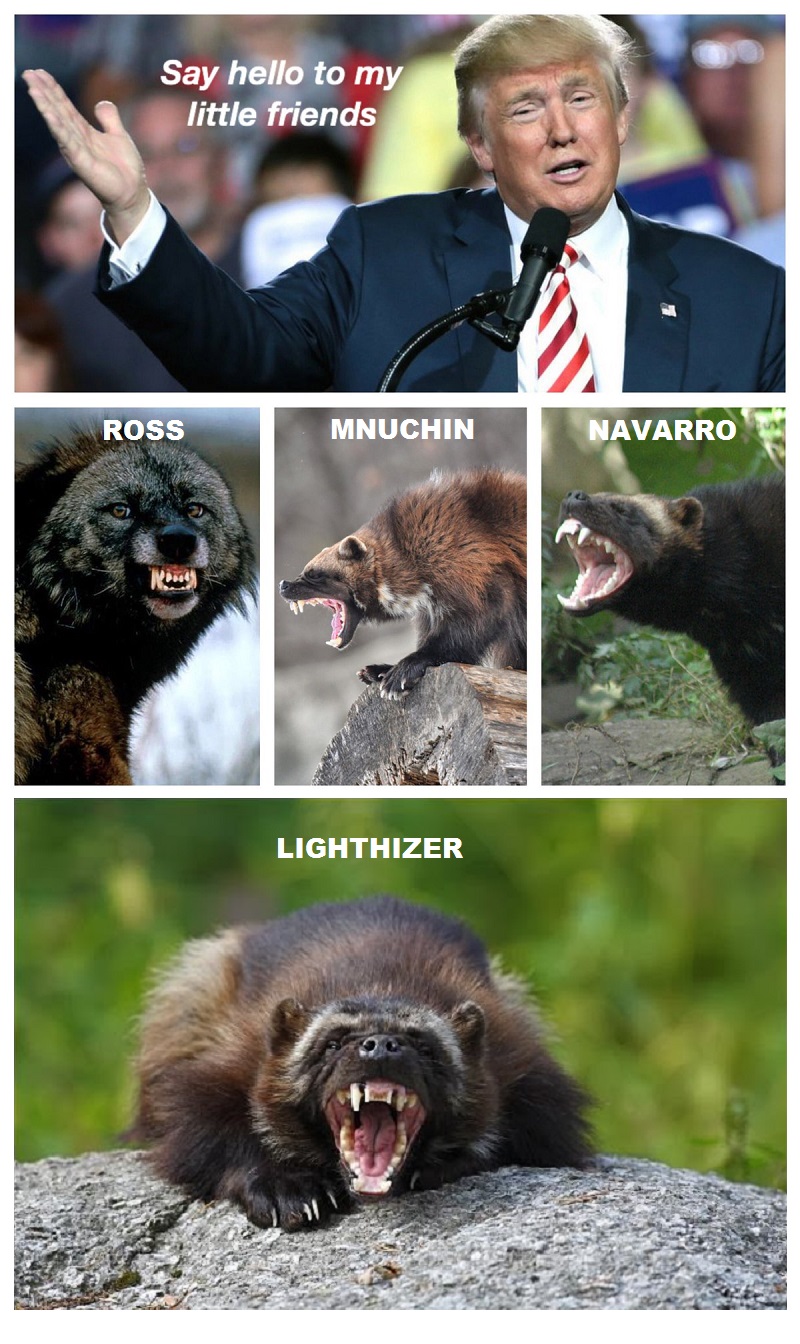 President Trump dismissed concerns the U.S. consumer would pay for the tariffs on Chinese goods, adding, the tariffs could be completely avoided if companies buy or manufacture in the U.S.  He continued on his tough stance against China, saying the country has taken advantage of the U.S. for years.

His comments echo his campaign pledge of holding China accountable for its trade abuses:

As president, Donald Trump is delivering exactly the tough stance he called for as a private citizen two decades ago, using tariffs as his chosen weapon. Because, of course, unlike diplomatic statements at the U.N., tariffs actually get the Chinese regime's attention. 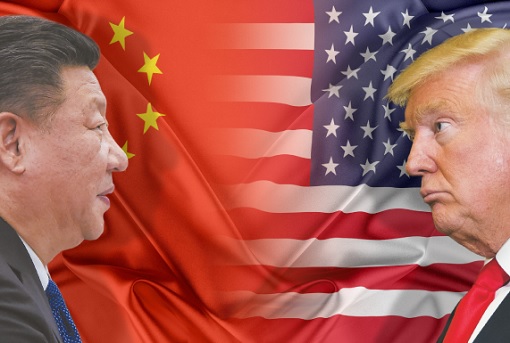 We were told by everyone in the establishment, left and right. If we open up to China, if we give them the Olympics, if we only scold them gently behind closed doors -- because they hate losing face -- .if we do all that, China will behave.

What idiots! China never had good intentions. Since the late 1980s, its stated aim has been world domination, technologically and militarily. Their path to that was economic domination, achieved by hacking and stealing the West's technology and exploiting its own workers and the environment. The establishment idiots were too naive -- or too corrupted by Chinese cash -- to see it.

There was one lone voice, though, two decades ago, who said the following about China:

"Our biggest long-term challenge will be China....The Clinton administration, like the Bush administration, follows a policy of "constructive engagement" with China. When China disappoints expectations and ignores lofty lectures, we issue a few condemnations, hammer out some meaningless resolution at the UN (if we can get it by China's UN delegation), and call upon them to comport themselves like citizens of the community of nations. Then we get back down to business as if nothing happened. How's this policy working? It isn't."

Guess who said this? Well, that was Donald Trump. And in a 2010 interview with Larry King, he said,

Learn More @ Standing up to China