This is not a drill - Enemies, foreign and domestic, want American history erased.

The Woke Taliban have won. HBO Max announced on Tuesday it is blacklisting Gone With the Wind (1939) 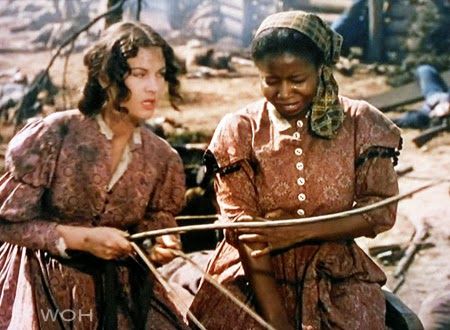 Buy hard copies of the art you love — books, movies, TV, music — because it is all about to quietly and not-so-quietly disappear.

Purchasing a digital copy is not enough. Fascists like Amazon will either delete entirely or desecrate your digital copies with censorship.

This is not a drill.

The Woke Taliban have won. HBO Max announced on Tuesday it is blacklisting Gone With the Wind (1939), and with it, Hattie McDaniel’s performance for which she won the Best Supporting Actress Oscar of 1940.

There’s more than one way to burn a book. And the world is full of people running about with lit matches. – Ray Bradbury, Fahrenheit 451

Come on, I did tell you… I told you so last week, I told you so years ago, and this is going to get a lot worse before it gets better.

The Woke Taliban are literally toppling statues, literally rewriting history, literally creating their own caliphate, literally renaming streets, literally forcing people to their knees, so of course the destruction and desecration of art is part and parcel.

Every record has been destroyed or falsified, every book rewritten, every picture has been repainted, every statue and street building has been renamed, every date has been altered. And the process is continuing day by day and minute by minute. History has stopped. Nothing exists except an endless present in which the Party is always right. ― George Orwell, 1984

First Gone With the Wind, which is still the most popular and financially successful movie ever made, will be blacklisted by HBO. Then the network promises its return, but only after it’s been desecrated:

“’Gone With The Wind’ is a product of its time and depicts some of the ethnic and racial prejudices that have, unfortunately, been commonplace in American society. These racist depictions were wrong then and are wrong today, and we felt that to keep this title up without an explanation and a denouncement of those depictions would be irresponsible,” an HBO Max spokesperson told Variety. “These depictions are certainly counter to WarnerMedia’s values, so when we return the film to HBO Max, it will return with a  discussion of its historical context and a denouncement of those very depictions, but will be presented as it was originally created, because to do otherwise would be the same as claiming these prejudices never existed. If we are to create a more just, equitable and inclusive future, we must first acknowledge and understand our history.”

So Gone With the Wind will return after it’s been vandalized with a filmed introduction of the “correct” people instructing us on how to “correctly” view, experience, and interpret this piece of art. And let me assure you HBO Max will not allow you to fast-forward through this tutorial on how to interpret art. Like those commercials you cannot skip over, you will be forced to sit through it.

In other words, when HBO Max says the movie will be “presented as it was originally created,” that’s a lie. It now will be presented with a tutorial telling you how to feel (guilt, shame, anger) about what you’re about to watch.

The bad news is this is only the beginning…

This good news is that this too shall pass…

Need I remind you this all began with Oscar-winner screenwriter John Ridley’s list of demands. It was his L.A. Times editorial that blackmailed HBO Max into blacklisting a classic 73 percent of black people love. Here’s his list of his deliberately vague blackmail demands… [emphasis added]

…all content providers look at their libraries and make a good-faith effort to separate programming that might be lacking in its representation from that which is blatant in its demonization.

It doesn’t just “fall short” with regard to representation. It is a film that glorifies the antebellum south. It is a film that, when it is not ignoring the horrors of slavery, pauses only to perpetuate some of the most painful stereotypes of people of color.

Goodbye Animal House (1978). We can’t have the black bar scene (that Richard Pryor personally approved of).

Goodbye Lenny Bruce and George Carlin and M*A*S*H and  You Only Live Twice and Big Trouble In Little China and Silver Streak and Cotton Comes to Harlem and Car Wash and Pulp Fiction and Billy Madison and Treasure of the Sierra Madre and Driving Miss Daisy and Black Hawk Down and True Lies and The Green Mile and Blazing Saddles, Scarface, Sixteen Candles, Soul Man, Breakfast at Tiffany’s, The Good Earth, The Good, the Bad, and the Ugly, Loony Tunes, Seinfeld, The Jeffersons, Married With Children, Sanford and Son, Soap, All In the Family, and every one of Woody Allen’s films…

And let’s not forget Cops, which has already been blacklisted, along with Song of the South.

Buy hard copies of the art you love — books, movies, TV, music — because it is all about to quietly and not-so-quietly disappear.

Purchasing a digital copy is not enough. Fascists like Amazon will either delete entirely or desecrate your digital copies with censorship.

This is not a drill.