President Trump to World Leaders: "We reject the ideology of globalism" 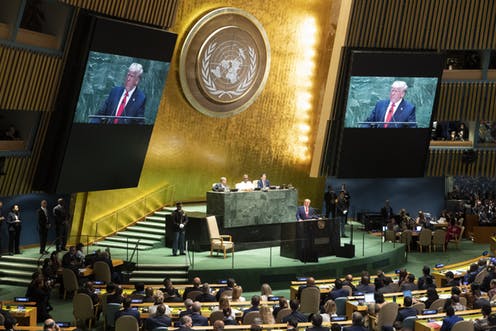 This is why They want Him gone.

America is governed by Americans. We reject the ideology of globalism, and we embrace the doctrine of patriotism.

Around the world, responsible nations must defend against threats to sovereignty not just from global governance, but also from other, new forms of coercion and domination.

The United States lost over 3 million manufacturing jobs, nearly a quarter of all steel jobs, and 60,000 factories after China joined the WTO.  And we have racked up $13 trillion in trade deficits over the last two decades.

But those days are over.  We will no longer tolerate such abuse.  We will not allow our workers to be victimized, our companies to be cheated, and our wealth to be plundered and transferred.  America will never apologize for protecting its citizens.

The White House
Office of the Press Secretary
September 26, 2019

** REMARKS BY PRESIDENT TRUMP
UPON AIR FORCE ONE ARRIVAL

THE PRESIDENT: Hello, everybody. I just watched a little bit of this on television. It’s a disgrace to our country. It's another witch hunt. Here we go again. It's Adam Schiff and his crew making up stories and sitting there like pious whatever you want to call them. It's just a -- really, it’s a disgrace.

It's a terrible thing for our country. They can't do any work. They're frozen -- the Democrats. They're going to lose the election; they know it. That’s why they're doing it. And it should never be allowed, what's happened to this President.

And despite that, I think I've done just about more than any President in his first two and a half years in office. If you look, I think you'll see very few could compete with the things we've done for our military, for the economy. We have the best economy anywhere in the world, by far. We've rebuilt our military. We've done so many things that are so incredible with tax cuts and regulations. And I have to put up with Adam Schiff on a per- -- on an absolutely perfect phone call to the new President of Ukraine. That was a perfect call.

My call was perfect. The President, yesterday, of Ukraine said there was no pressure put on him whatsoever. None whatsoever. And he said it loud and clear for the press. What these guys are doing -- Democrats -- are doing to this country is a disgrace and it shouldn’t be allowed. There should be a way of stopping it -- maybe legally, through the courts. But they're going to tie up our country. We can't talk about gun regulation. We can't talk about anything because, frankly, they're so tied up. They're so screwed up, nothing gets done --except for when I do it.

I'm using Mexico to protect our border because the Democrats won't change loopholes and asylum. When you think of that -- and I want to -- I'll tell you, I want to thank Mexico. Twenty-seven thousand soldiers they have. But think of how bad that is -- think of it -- where we use Mexico because the Democrats won't fix our broken immigration system. We need their votes. If we don’t get their votes, we can't do it.