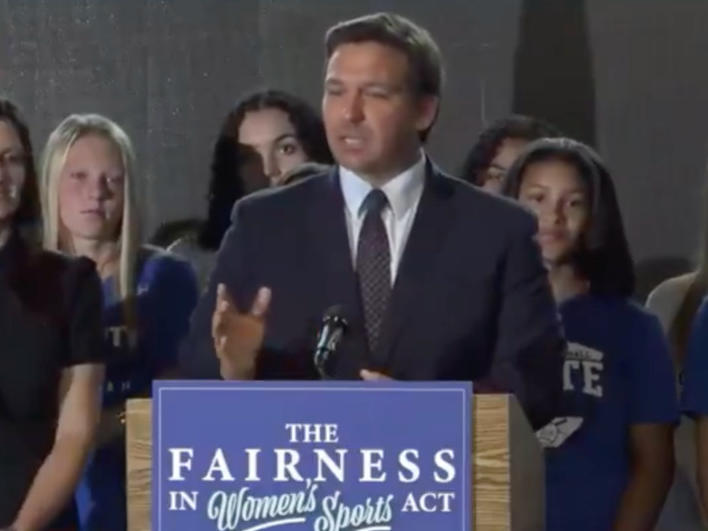 After signing S.B. 1028, Gov. DeSantis introduced Selina Soule, who spoke about her experience losing to biological males who identify as female:

“In 2017, Connecticut began allowing two male athletes who self-identify as girls to compete in girls’ sports. During all four years of high school, I was forced to compete against them, even though they were bigger, stronger, and faster than me, because they were male,” Soule recounted. “In just three years, these two athletes won 15 women’s championship titles and they set 17 new individual meet records, records which we girls had no hope of breaking.”

“Those two biological males would dominate the field, leaving us girls to compete for third place and beyond. No matter how hard we’d train, and how hard we pushed ourselves, they beat us time and time again. We elite female athletes don’t give up a normal high school experience just for participation trophies. We race to win,” she said.

“This isn’t about self-expression, this is about our right — a woman’s right — to win,” Soule declared. “During my junior year, I was denied the chance to compete at the regional New England championships. I missed advancing to the next level of competition at the 55-meter dash by just two spots, two spots that were taken by biological males,” she recalled.

“It was frustrating, heartbreaking, and demoralizing to be sidelined in my own sport,” Soule said. She said she reviewed the bill DeSantis would sign. “All I can say, on behalf of all female athletes, is, Thank you, governor.”

“Let me say very clearly, in Florida, we’re going to do what’s right"

“And so we won’t be cowed. We will stand strong,” DeSantis added. He declared that even if the price of defending fairness in women’s sports is “that we lose an event or two, I would choose to protect our girls every day of the week and twice on Sunday.”