Thursday evening, more than 1,000 migrants housed in a detention center in southern Mexico broke out and hit the road.

More than half of the roughly 1,300 migrants later returned to the Siglo XXI facility in the border city of Tapachula in Chiapas state, but about 600 are still unaccounted for, the National Migration Institute said in a statement.

Migrants from Cuba, who make up the majority of the people being held at the center, were largely behind the breakout, the institute added. Mexican newspaper Reforma reported that Haitians and Central Americans were also among those who fled the facility, which has been crammed with people.

The National Immigration Institute said the escapees were not armed and “there was no confrontation.” But “federal police with riot shields later streamed inside to control the situation, as a crowd of angry Cubans whose relatives were being held at the facility gathered outside.”

Earlier Thursday, Mexico’s top human rights official had toured the facility, I wonder what he thought after he viewed the overcrowded, filthy center.  President Trump repeated his threat to close the border if Mexico doesn’t stop the caravans approaching the U.S.- Mexico border.

A very big Caravan of over 20,000 people started up through Mexico. It has been reduced in size by Mexico but is still coming. Mexico must apprehend the remainder or we will be forced to close that section of the Border & call up the Military. The Coyotes & Cartels have weapons!

Last month,  Mexico’s Interior Secretary Olga Sanchez Cordero announced, “We have information that a new caravan is forming in Honduras, that they’re calling ‘the mother of all caravans,’ and they are thinking it could have more than 20,000 people.”

Mexican police and immigration officials in the southern state of Chiapas on Monday rounded up hundreds of undocumented Central American migrants headed for the U.S. border. 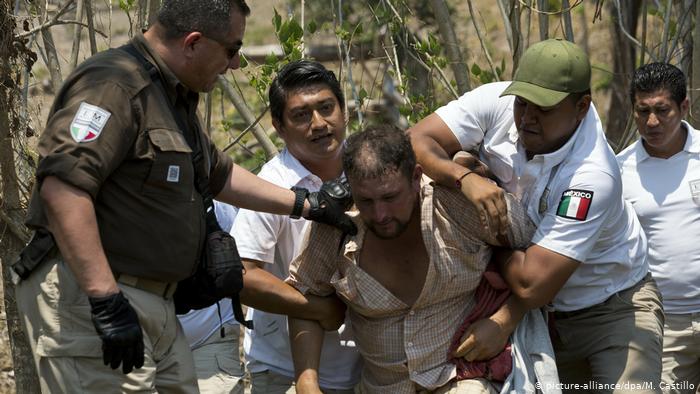 Mexican police and immigration officials in the southern state of Chiapas on Monday rounded up hundreds of undocumented Central American migrants headed for the US border. It's one of the largest raids targeting a caravan since the exodus began last year, and comes as the US ramps up pressure on Mexico to curb the flow of migrants.

What we know so far:

Change of heart or something else?   We will see. My guess is that the Lopez-Obrador administration is starting to feel the heat from Mexicans. A Mexican friend told me last night that President Lopez-Obrador may be trying to show the cartels who is "boss."  Over the last few weeks, we've read about the role of organized crime in this human movement.