"Dinesh D’Souza is an effective filmmaker and he didn’t disappoint with 2000 Mules, a riveting documentary"

2000 Mules begins with the premise that Trump voters have found it impossible to believe that Trump lost the election. When they contrast his campaign appearances (60,000 screaming fans) with Biden’s campaign appearances (6 vaguely animated lumps sitting in little circles); the bellwether states showing Trump winning by a large margin; the significant gains Trump made with Hispanics and Blacks; the millions of votes Trump gained over the four years of his presidency; and the mysterious overnight counting shut-down in the states that ultimately gave Biden his “victory,” they know that something is wrong.

The folks at True the Vote also suspected that something was wrong, very wrong. The founder, Catherine Engelbrecht, working with Gregg Philips and a team of computer analysts, came up with a very clever way to determine whether there was fraud. They suspected it, thanks to the way in which Democrats in key states used COVID as an excuse to increase absentee voting, including states that allowed only absentee voting with drop boxes across cities and towns, there had been massive ballot harvesting. That is, people, both real and fake, didn’t fill out their own ballots. Instead, they were collected, completed, and put into drop boxes by partisan and paid activists.

To prove this theory, True the Vote obtained geo-tracking information for major urban areas in Pennsylvania, Michigan, Wisconsin, Georgia, and Arizona, allowing them to follow cell phone signals. They marked all the drop boxes and all the facilities for left-wing non-profits. They then looked for cell phones that traveled between the non-profits and drop boxes at least ten times (to be sure to winnow out statistical noise). Through FOIA requests, they also obtained as many videos as they could showing people stuffing multiple ballots into the drop boxes, a completely illegal act.

Their data revealed 2,200 mules in just five cities, visiting between 20 and 45 drop boxes each, at which they dropped off an average of five ballots. When you do the math, the numbers are staggering: 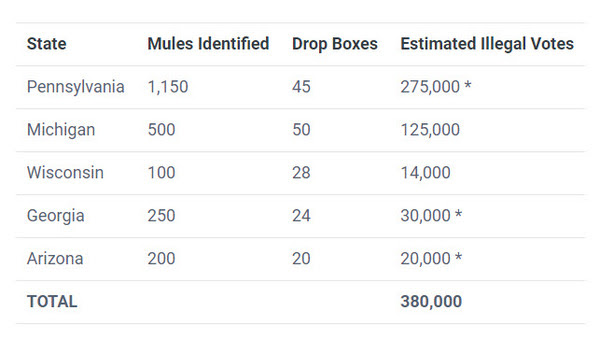 Donald J. Trump . May 3rd, 2022: "Ignorance is not bliss. Sky high inflation, threats of World War III, and the invasion across our borders are a direct consequence of the stolen 2020 election. What happened in 2020 can never be allowed to happen again!"