My appearance on Tucker Carlson Tonight discussing the massive jury verdict: “These are the people who get up at 3 or 4 in the morning [to go to work] when Oberlin students are just getting home” 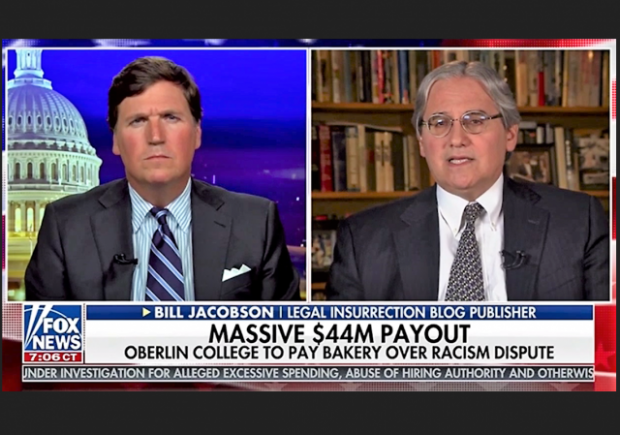 I appeared tonight on Tucker Carlson Tonight to talk about the massive jury verdict against Oberlin College in the Gibson’s Bakery lawsuit.

This was an unusually long segment, demonstrating the importance of the case to Tucker. He spoke for about 3 minutes then I got 3 minutes. In case you were wondering, 3 minutes for a guest in primetime on the most popular cable news network is a long time. I appreciate the opportunity.

WAJ: They literally were just minding their business that day .. when they called the police on some shoplifters. And because of the crazed social justice, so-called social justice movement on our campuses, they were immediately designated an oppressor, in part because of their skin color, in part because they’re the owner of a business, and they were put into a pigeonhole of someone who must be racist, who must have engaged in racial profiling. And nobody seemed to actually care about the facts, that these are students actually did shoplift. And I think that’s what’s so outrageous about it.

I think you noted it in your opening, that these are just ordinary people. These are not people who are engaged in the political process. They didn’t put themselves  out into the arena. This is not like the other social media mobs we’ve heard about, where someone sends out a tweet, or post something on Facebook, and all of the sudden there’s a mob against them. That’s bad enough. These are literally people who got up probably at 3 in that morning, and did absolutely nothing wrong. But that campus fervor, and that campus zeal to express some sort of outrage at the system, visited them. And I think that’s the thing that’s so chilling here.

Posted by William A. Jacobson