VA. Governor supports infanticide. He also has a racist picture in his past. Democrats are OK with the former, but not the latter .. call on him to resign.

CBS News uncovered a page from Northam's yearbook at the Virginia Military Institute which had nicknames listed underneath his name. One of them was "Coonman," a racial slur.

A reporter from CBS News affiliate News 3, Brendan Ponton, went to the Eastern Virginia Medical School library in Norfolk Friday afternoon and found the page on which the photo appears.

Northam's predecessor, former Gov. Terry McAuliffe, tweeted "it's Ralph to step down, and for the Commonwealth to move forward."

Democratic New Jersey Gov. Phil Murphy, the vice chair of the Democratic Governors Association who is set to take over in 2020, called on Northam to resign Friday night on MSNBC.

"I don't see the governor's got any other choice other than to step aside," Murphy said. 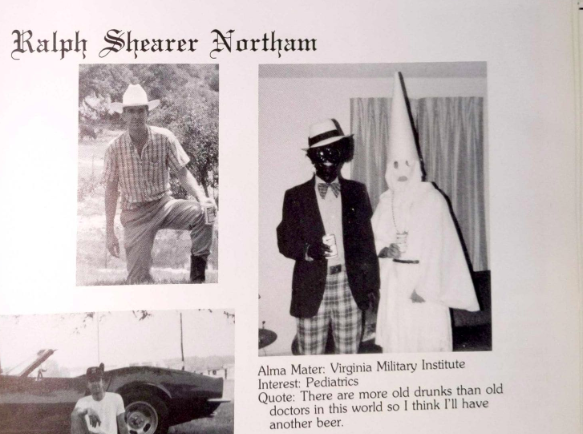 Research reveals nearly $2 million in campaign contributions from the taxpayer funded pro-abortion group Planned Parenthood sent to Northam, who endorsed a bill that would allow new mothers to determine whether they wanted to keep a child after delivery, essentially legalizing infanticide.

Northam received $1.996 million from Planned Parenthood Virginia over the course of five years, with most of the donations coming in during his 2017 election campaign. These include massive cash injections of $338,852, $278,247, $255,641, and other similar amounts in the final days before the election.
Do you like this post?