On Monday, September 13, the U.S. Dept. of Health and Human Services transitioned from a direct ordering process (of mAb inventory) to a state/territory distribution system - LINK

As the administration of Joe Biden steps in to take control over Monoclonal Antibody (mAb) inventories and distribution, blocks red states from receiving the treatment, and makes grand pronouncements about controlling supply based on “equity”, the cowed White House press corps sits silently .. except for Newsmax reporter Emerald Robinson.

WATCH Jennifer Psaki lie, twist, obfuscate and manipulate the discussion in an attempt to defend an indefensible position when questioned by Robinson about Biden’s recent moves to punish Florida: 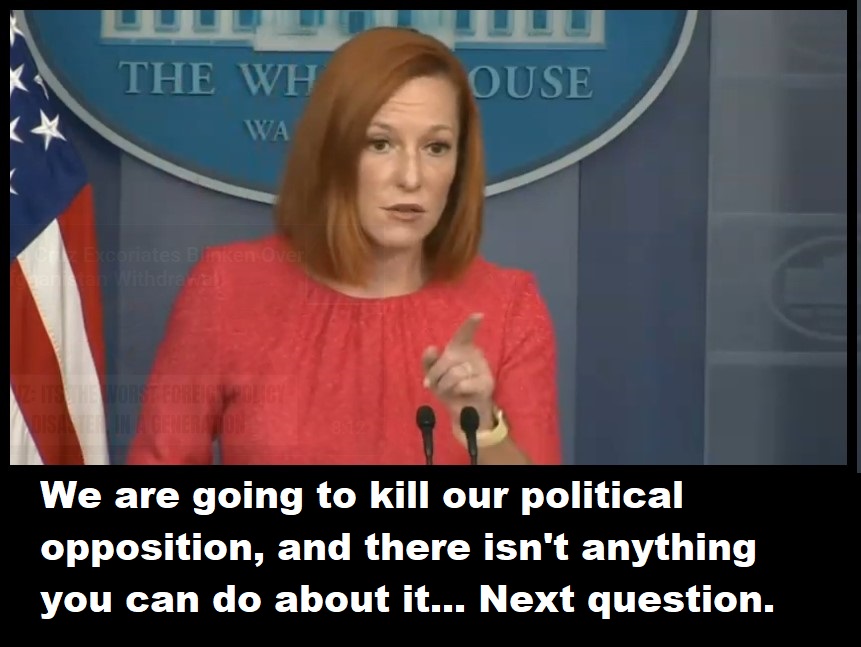 Keep in mind Florida Governor Ron DeSantis was initially blasted by progressives, the media writ large and the White House for his support of Monoclonal Antibody treatment. As soon as they noticed the approach was working, HHS moved to block the DeSantis mAb program by taking control of the inventory.

DeSantis outlined the issues Florida is facing after the Biden administration instructed the federal offices of HHS to punish the successful therapy and recovery efforts of the sunshine state healthcare system. He outlines the purchase agreement that Biden intentionally violated and also the issues created by the federal government now blocking direct purchasing of treatment from the manufacturer.

Additionally, the governor noted he has held meetings with ¹GlaxoSmithKline (GSK) to purchase mAb shipments directly from the second source manufacturer in order to work around the roadblocks being presented by the Biden administration.  Gov. DeSantis reaffirmed his commitment to stand in the way, and not allow Joe Biden to kill Americans just because he doesn’t like their politics.